Although St. Thomas’s Almshouses occupy a prominent position at the junction of Old Road West and Wrotham Road Gravesend, it is possible that comparatively few people are acquainted with the history of the Charity and its development. It all began with Henry Pinnock who was Portreve of Gravesend in 1597, 1607 and 1613. His farsighted philanthropy led him to give by his Will, made in 1624, a piece of ground at the junction of Windmill Street and King Street in the old Parish of Milton, with four messuages standing on part of it, ‘for the better relief and maintenance of such poor decayed people as should from time to time dwell in the ancient Parishes of Gravesend and Milton: such messuages to be forever known as St. Thomas’s Houses.’ 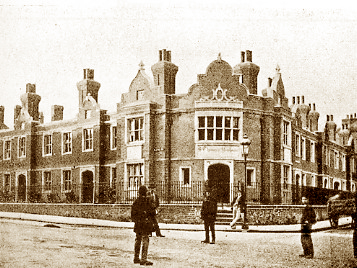 The original site of the Almshouses was on the corner of what is now King Street and Windmill Street at a crossroads that were for many centuries known as ‘St. Thomas’s Waterings’, where pilgrims to the Shrine of St. Thomas A’Beckett stopped for rest and refreshment. Hence the name given to the Almshouses.

In addition to the gift of St. Thomas’s Houses, Henry Pinnock also bequeathed a small Estate called ‘Hoggs’ at Grays in Essex to the use of the poor of Milton and Gravesend and he added in his Will that ‘if any other means happen hereafter to be given by any well disposed people towards the maintenance of the aforesaid houses in Milton, it was his desire that the Trustees should ‘see the same performed.” The Estate at Grays consisted of two dwellinghouses or rooms with a kitchen adjoining, barns, stables and yards, together with two acres of marsh ground. 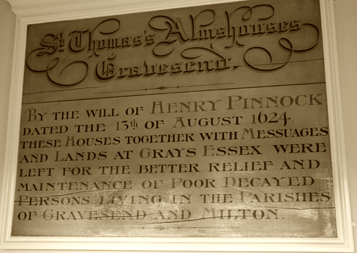 The first appointed overseers of the Almshouses were Pinnock’s friends, Henry Tucker and John Godden, both of Milton, and Edward Finch and Edmund Mercer, both of Gravesend. They were appointed to be overseers in trust to see his Will performed as touching the poor of St. Thomas’s Houses, and that they should during their natural lives have the placing and displacing of ancient decayed poor people of the two Parishes into and out of the said Houses, such as they shall think good to appoint, and when and as often as the said Trustees should die or refuse to act, then the Church wardens, overseers and chief inhabitants of Milton and Gravesend, together with the survivor and survivors of the said feoffees or their successors, survivors or survivor for the time being with one assent to appoint other feoffee or feoffees in the room in place of the feoffee dying or resigning, because it is meant for the good of the poor people and that the feoffees be always dwelling in Milton and Gravesend so as there be always four, two of them of Milton and two of them of Gravesend, forever.’
James Fry, by his Will made in 1710, gave £100 to be laid out in erecting a building on the said piece of ground at the east end of St. Thomas’s Houses for the use of the poor of Milton and Gravesend, and this sum was spent accordingly. In 1730 the Trustees erected two other dwellings on the ground out of the accumulations of the rent of the Grays Estate. In 1879 the Trustees erected two additional Almshouses on the same piece of land out of a legacy which they had received many years previously from a Miss Ellen Harriet Evans Townsend.

In 1891, with the consent of the Charity Commissioners, the land at Grays in Essex was sold for £7,250 and the Trustees formulated a scheme for the utilization of the proceeds in the purchase of the present site for the Almshouses at the junction of Old Road West and Wrotham Road. The scheme would provide for the building of new Almshouses with the transfer of the Almspersons into them and the sale of the old Almshouses.

In 1894 an Order of the Charity Commissioners was made to bring into force the Scheme and the new site was acquired for £1,087. In 1897 six blocks of new buildings were completed at the cost of £5,002.

During the years 1897/8 Queen Victoria’s Diamond Jubilee Committee in Gravesend collected £830, which was used in the erection of the Common Room and Lodge. In 1898 the original Almshouses were sold for £10,100 (now the site of National Westminster Bank) and between that year and 1901 four further blocks were erected on the new site at a cost of £4,897. As a result, by the turn of the century, there were ten blocks of Almshouses on the new site. These Almshouses were bed sitting rooms with small kitchenettes. The residents shared the bathroom and toilet facilities.

The endowment fund was initiated as a memorial to the late Prince Albert, the Consort of Queen Victoria, whose death occurred on the 14th December 1861, when a sum of £355 was raised. It was added to in 1865 by the surplus (£134) arising from a fund collected in Gravesend for the relief of those suffering from what was called the ‘Cotton Districts Famine’ induced by the Civil War in the United States of America, 1862/3.

This fund which has been added to by donations and legacies from generous townsfolk and others over the years is now known as The Henry Pinnock and Victoria & Albert Memorial Charity. All benefactors are permanently recorded on display boards in the Almshouse boardroom. 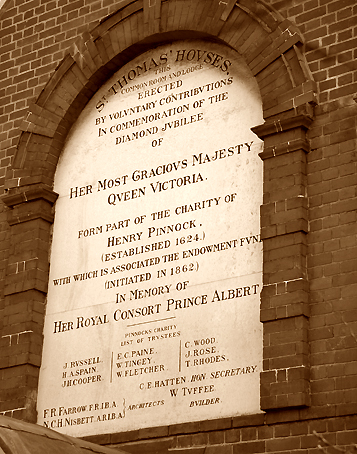 Further blocks of Almshouses were built in 1937 and 1951 and in 1960 extensions were built onto some of the blocks to provide better facilities for the residents. The site, having been brick fields in the earlier part of the 19th century, was never without its problems and in the 1930’s the Charity suffered a big loss through the partial subsidence of one of the blocks of Almshouses, the repairs to which resulted in expenditure of £1,068. During the 1980’s the Trustees were increasingly aware that the accommodation provided in St. Thomas’s Almshouses was very dated, even though the accommodation was popular with residents who were in the main only having to pay £5 a week for their rooms, which included free electricity!

In the 1980’s architects were commissioned to draw up a scheme for the improvement of the Almshouses by conversion of the bedsitting rooms into properly equipped flats. Blocks 1-4 of the old Almshouses were to be the first to be improved but the buildings were already showing signs of stress. When the builders went on site to commence operations the first step was to be to underpin the existing building structures. However, the first piles driven into the ground actually went down thirty metres before meeting any solid ground. It turns out that most of blocks 3 and 4 had been constructed over the top of a chalk pit that had been dug during the brick making history of the site. The consequence was that all work had to stop, the buildings were shored up and the residents of those blocks had to be moved out. The Trustees were then faced with a difficult decision. Should money be spent in trying to renovate the existing buildings and then to improve the accommodation they provided, or should there be a bold plan for redevelopment of the whole of the site. After consultation with the Charities Commission, The Almshouses Association and The Housing Corporation, it was decided that, with Government assistance through The Housing Corporation, a scheme should be drawn up to redevelop the whole of the site.

Under the chairmanship of Mr. Jeffrey May, the Trust became a Housing Association and local architects, Cavell Malloch Associates, were employed to draw up a three phase scheme for the redevelopment of the Almshouses. Phase I involved the demolition of old blocks 1-4. The development consisted of twenty flats in four blocks, together with three bungalows, all built to a high specification, with the bungalows being specially designed to accommodate the disabled. The contract for the new buildings was awarded in March 1992 to Ian G. Ross Limited of Rochester and the first phase was officially opened by the Lord Bishop of Rochester, The Right Reverend Michael Turnbull, on the 30th September 1993. In opening the new buildings the Bishop drew on the connection with the pilgrims to St. Thomas’s tomb at Canterbury who used to rest at the old St. Thomas’s Almshouses when they were in the centre of Gravesend. He referred to life in general being a pilgrimage and he felt assured that the residents of the new Almshouses would be extremely comfortable at this stage of their pilgrimage of life in the new dwellings they now occupied. Phase I of the development was carried out at a cost of £1,237,980 which was met from insurance compensation for the subsidence, a Housing Corporation grant of £722,980, the Trust’s own capital reserves and a mortgage borrowing.

Phase II of the redevelopment consisted in the demolition of blocks 9-13. The new buildings were designed by David Croydon Architects of Gravesend and the development was constructed by Jenners Limited of Folkestone. The new buildings commenced in March 1997 and were completed in 1998 under the chairmanship of Mr. Robert Gladwell. Phase II was formally opened by The Lord Bishop of Rochester, The Right Reverend Michael Nazir Ali on the 17th June 1998. Phase II consisted of eighteen flats and three bungalows and was built at a cost of £923,367 being met by a Housing Corporation Grant of £360,000, the Trust’s own capital reserves and some mortgage borrowing. 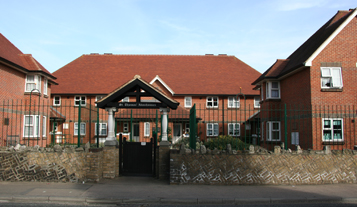 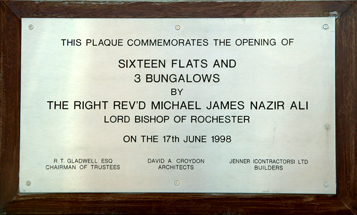 The final phase of redevelopment commenced in April 1999 with completion in July 2000. This final development consists of 20 flats, including two purpose built warden’s flats for the warden and deputy warden who reside on site. The architect and builders for Phase III were the same as for Phase II. Phase III has been built at a cost of £1,114,395 being made up of a Housing Corporation Grant of £359,468, the Trust’s own capital reserves and some mortgage borrowing. Phase III was officially opened by Marian Franks, South East Director of The Housing Corporation on 5th July 2000. In the space of under ten years St. Thomas’s Almshouses have been brought up to date at the time of the centenary of the move from King Street to Old Road West. The Trustees believe that the new buildings are a credit to the town architecturally and will provide excellent accommodation for many years for the residents of the Almshouses. To complete the modernisation programme extensive refurbishment and extension works were carried out in 2003/2004 to The Lodge, which now provides a tasteful communal lounge, hairdressing room and other facilities, all of which are now accessible by the disabled. The renovated Lodge was formally opened by Bishop Michael Turnbull C.B.E, on the 24th August 2004 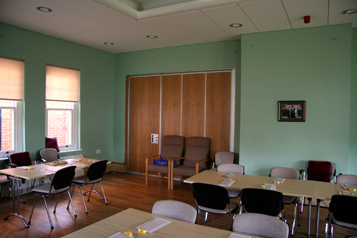 The Charity is run in accordance with schemes prepared by the Charity Commission. The first scheme was sealed on 3rd August 1921 and various subsequent schemes made alterations to it. Another comprehensive scheme to bring matters up to date was sealed on 29th June 1982. The Charity is administered by a body of trustees who give their services voluntarily. Day-to-day administration is carried out by the wardens, clerk and treasurer.